In 1998, a large restoration program was launched for the French Rhône to (1) increase minimum flow rates in by-pass sections, (2) rehabilitate connections with secondary channels and backwaters, and (3) restore migratory pathways for large migratory fishes. A cooperation between water managers, scientists and stakeholders led to the development of scientific surveys to evaluate the success of this restoration involving the collection and the management of data, the establishment of new protocols for restoration assessments and the development of predictive models (Lamouroux et al. 1999, 2007).

Arte movie of the project

There are thousands of ponds across Europe, from Lapland to Mediterranean islands and from remote areas to densely populated cities. Most of them provide habitats for animals like aquatic insects and others, even rare species. Ponds also contribute to habitat connectivity and enable organisms to cross the landscape in their function as “blue stepping stones”. Insects emerging from such ponds can be rich in both biodiversity and dietary energy. They provide food and essential fatty acids for terrestrial and avian consumers (bats, birds, spiders, lizards) and thus, important ecosystem services. However, the knowledge about the ecological role of emerging insects from ponds, and their contribution to biodiversity and dietary energy transfer to consumers of adjacent ecosystems is limited. With this project, we aim to fill this gap of knowledge answering some unresolved questions: how does the trophic status of ponds affect the biodiversity and energy content of emerging insects? How different are ponds from various regions, e.g., cities vs. remote areas, in supporting insect biodiversity? Such questions are to be answered through a highly collaborative network of around 80 young freshwater scientists within EUROPONDS.

This project is funded by European Federation of Freshwater Sciences (EFFS).

Increasing use of nanomaterials and release of the manufactured nanoparticles (NPs) in the environment add concerns about their environmental impacts. Due to their tiny size and high surface area, the NPs may undergo transformations promoted by various environmental factors inducing sedimentation through aggregation process and rendering benthic organisms significant targets for NPs exposure and effect. Nevertheless, how main NPs characteristics determine their interaction with benthic invertebrates and lead their biological fate and outcomes are not well understood. The overarching goal of the present project is to get deeper knowledge of the basic mechanisms governing the biological responses of aquatic invertebrates to NPs exposure under freshwater settings and to propose adverse outcome pathways (AOPs) for the freshwater gastropods. The emphasis will be on the improvement of the understanding of basic processes that govern the interactions of silver NPs (AgNPs) and freshwater snail Lymnaea stagnalis as representative of benthic invertebrates, which are currently understudied. By introducing different tools borrowed from physical chemistry, ecotoxicology, ecology and molecular biology, this project will focus on: (i) characterising the AgNPs behaviour in a freshwater microcosm; (ii) determining the bioaccumulation and internal handling of NPs to benthic gastropod; (iii) examining NPs-induced effects in selected target cells/tissue; (iv) exploring hemolymph protein-NPs interaction; (v) Establishing of a relationship between NPs intrinsic properties, and biological outcomes. We hypothesised that the ingested NPs will accumulate in the snail hepatopancreas and will translocate from the hepatopancreas to the circulatory fluid, thus altering the metabolic state of hepatopancreas and the hemocytes function. The proteins of the circulatory fluids (i.e. hemolymph) will interact with NPs forming a corona, which will modulates both the protein biological function and the NPs intrinsic property to a new bio-identity, that governs NPs intra-cellular uptake and response. The proposed research is original with a strong potential for transformation of environmental nanotoxicology and in particular the development of the invertebrate nanotoxicology, which is currently lagging. The outcomes will be of high fundamental research and methodological improvement values. The project will provide one of the first systematic studies allowing to formulate a AOPs concept of NPs to freshwater invertebrates and will thus significantly contribute to the better understanding of mechanistic basis for bioactivity of NPs towards these understudied aquatic organisms. New knowledge on the biocorona formation and its significance as a modulator of the NP-induced response in freshwater invertebrates that is never done so far will be addressed, and will allow the establishment of the firm linkage between the biocorona composition and toxicity responses.

FAUNISTIC INVENTORY OF THE BORNEO ISLAND 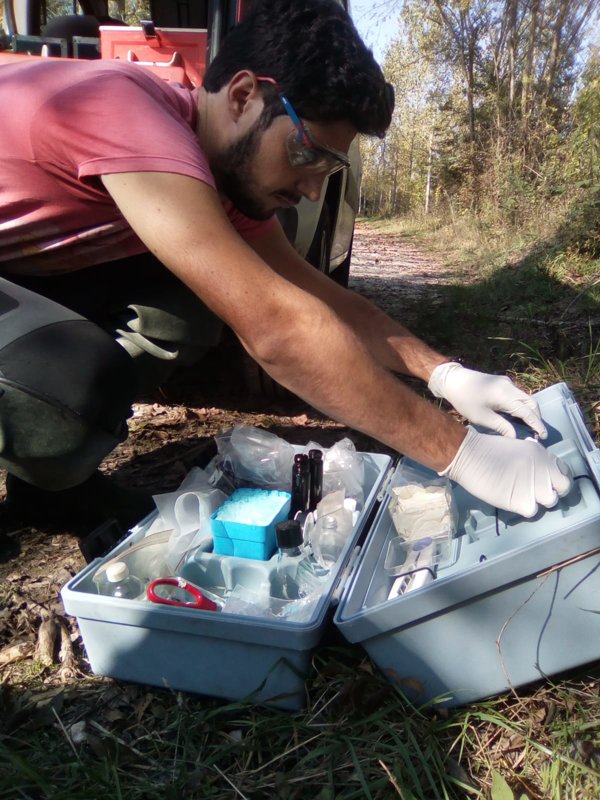